skip to main | skip to sidebar

My attempt at the mojo monday sketch #73

Happy Tuesday! My card was inspired by the mojo monday sketch this week. I was determined to get a card done last night, didn't matter that I was having a terrible time keeping my eyes open because I was so exhausted, I was getting it done!LOL In fact, you will see how tired I was. I was putting the little bling on the left top corner and I was going for the little "diamonds" when I got to the third one I thought I messed up and put pink on the other two. I was seeing pink for some reason, I was so mad at myself! There were a few pinks mixed in with the ones I wanted so it wasn't impossible. But this morning, after some much needed rest I see that there is only one pink "diamond" on there and the other two were just as I intended to do. Oh well, I guess you could say it adds character.lol I also missed an embellishment to go over the ribbon so I will add that later when I get home and I should have put the ribbon over one more layer of cardstock. Oh well, I tried and I did officially get it finished on Monday. Next time I better start earlier so I might (keyword is might) actually get it right. It wqas fun anyway and I did get a card done, so thank you mojo monday for keeping me on my toes, or should I say for helping me to stay awake long enough to get something done in my craft room. :)

Have a great day everyone! 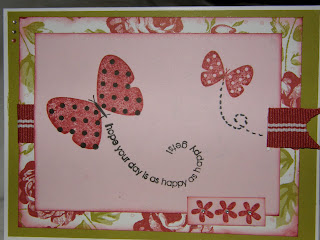 Posted by craftNmommy at 1:16 PM

Wow! It turned out beautiful! Love the colors!

Oh so beautiful!!! I love the colour combo and butterflies!! I wish we had that DP.

Sure Cuts A Lot Software

I like to visit these blogs, check them out!

Look who's visiting me...